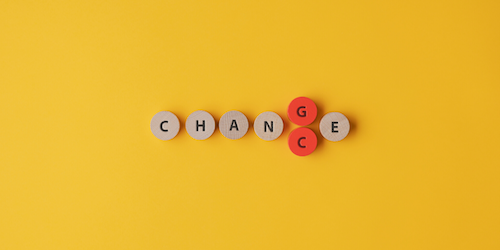 This article discusses poor performance in this $1.3 trillion (annual rate) American construction industry sector, how those in the industry resist change for improvement, and in turn, resist the positive payback that would come with that change.

There is much to address in the construction sector in terms of people, processes, and technology (also known as the project system). Many in the industry are living with anemic, systemic risk-riddled project systems and have not transformed their project system via an Organizational Change Management (OCM) project. In reality, and sometimes unknown to those in the industry, they are simply ignoring the risks.

As such, they have not assessed all the elements of their project system, found the performance gaps, and then fixed them – and kept them fixed via continuous improvement and the use of lessons learned. This lack of rigorous review is replaced with short-sighted, fragmented improvements that cause even further fragmented results, exacerbating the project system’s weaknesses.

Daniel Newman, writing for Forbes on August 8, 2017, in his article, “Top 5 Digital Transformation Trends in Manufacturing,” talks about the improvements the manufacturing sector is realizing as they make transformational change. Newman says the payback to manufacturers is, for example, smart factories being able to increase production capacity by 20%.

However, the construction sector is slow to transform to higher efficiency and go digital. McKinsey & Company, in their October 2017 article, “Navigating the Digital Future: The Disruption of Capital Projects,” says productivity in the construction sector has stagnated for decades, with the average capital project reaching completion 20 months behind schedule and 80% over budget, while avoiding digital tools and platforms.

The article says digitization can offer potential cost reductions of up to 45% on each project and that using digital tools for on-site execution can increase productivity and eliminate cost overruns.

The figure below ties poor performance and low efficiency to the digital aspects of a company’s operations. 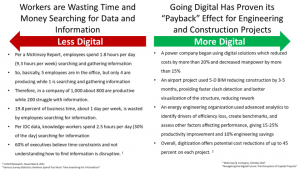 Executives never think of the many cost benefits and reduction in risks associated with changing their project system for the better. Their mindset is always incorrectly focused on the cost of the change, not the often huge benefits.

The subject of cost benefit might cause a company to ask, “What is the Return on Investment (ROI) of this OCM project?” Simply put, the ROI of the OCM project is the additional value created for the company, e.g., having future projects be on-time and within budget, being more competitive, reducing risk, providing high quality and remarkable safety, as well as high organizational morale and productivity.

However, this desired ROI is driven by people-dependent adoption and usage (people changing how they do their jobs), e.g., the more adoption, usage, and actual organizational change, the more the ROI that is realized. So, a company’s expense actually becomes an investment.

THE ELEMENTS OF AN OCM PROJECT

An OCM project has many factors. Two key factors are the desire to change (the positive side) and resistance to change (the negative side). So ask yourself, “Is my company, starting in the executive suite, resisting the ROI of us planning and executing an OCM project to improve our poor performance?”

The OCM project will apply a structured approach with project management principles and change management techniques, have dedicated resources, obtain appropriate funding, and be integrated into a company’s project system and daily operations.

The figure below shows the key elements needed for pursuing an OCM project. 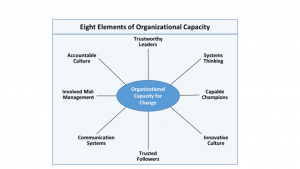 In their March 2017 article, “A Roadmap for a Digital Transformation,” Tanguy Catlin, Johannes-Tobias Lorenz, Bob Sternfels, and Paul Willmott of McKinsey & Company put payback in context. They say that any initiatives a company considers should be the ones that provide the following benefits (in order):

Payback is second only to being strategically important and rises above the reduction of complexity.

If a company is suffering from an array of negative performance factors, they are probably thinking about the strategic importance of performance improvement. If they are worried about the cost of fixing those problems, they will (rightfully) want to understand what the payback will be for spending that money (expense) on an OCM project.

Think about payback like this: an owner company would not build a new facility unless it is a well-planned project. Therefore, a company should not consider trying to change from its inefficient, risky ways to high efficiency unless it is a single project and not a collection of fragmented company initiatives housed in siloed organizations. (Note: Studies show that numerous fragmented company initiatives result in change saturation and cause employees to resist or ignore the intended change.)

The figure below shows how going digital and improving operational efficiency and effectiveness via an OCM project can drive significant payback. 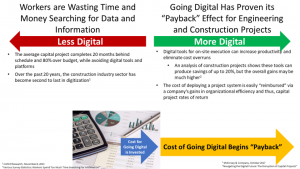 Owners and contractors in the construction sector should review their bottom line. If their bottom line needs improvement, they should determine whether they need an OCM project to increase efficiency.

In planning for the OCM project, executive management needs to understand the cost of the OCM project and gain an understanding of what the payback of that cost outlay (expense) will mean to the company.

Will it be considered a good investment eventually? Will the OCM project lower costs, reduce schedules, increase quality, enhance safety, reduce risk, and grow morale and productivity with proof via glowing metrics?

If the answer is Yes to one or more of these six factors, the company should stop resisting payback.

Why Should You Care About Standard Deviation?

This website uses cookies to improve your experience while you navigate through the website. Out of these cookies, the cookies that are categorized as necessary are stored on your browser as they are essential for the working of basic functionalities of the website. We also use third-party cookies that help us analyze and understand how you use this website. These cookies will be stored in your browser only with your consent. You also have the option to opt-out of these cookies. But opting out of some of these cookies may have an effect on your browsing experience.
Necessary Always Enabled
Necessary cookies are absolutely essential for the website to function properly. This category only includes cookies that ensures basic functionalities and security features of the website. These cookies do not store any personal information.
Non-necessary
Any cookies that may not be particularly necessary for the website to function and is used specifically to collect user personal data via analytics, ads, other embedded contents are termed as non-necessary cookies. It is mandatory to procure user consent prior to running these cookies on your website.
SAVE & ACCEPT